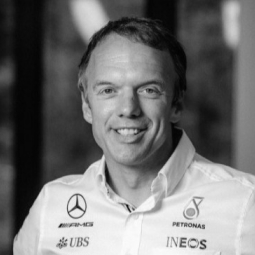 Michael's fascination with anything mechanical began at a young age, where he was often on hand to offer "guidance and support" whilst his father undertook home repair or restoration projects.

After spending many years experiencing the British and World Rally Championships first-hand, a career in Motorsport seemed inevitable, but it wasn't until one critical day in early 2002, six years after starting out a career in IT with the local borough council, that the opportunity presented itself.

In May 2002, Michael joined the Renault F1 Team as a Network Support Analyst, initially responsible for the teams Novell Netware environment but quickly tasked with leading a modernisation of the team’s IT Infrastructure both in the factory and at trackside locations throughout the world. Notable highlights included the design, build and commissioning of Enterprise and HPC data centres and the teams IT migration to the cloud.

In total, Michael spent 13 years in Enstone, in various IT operational and leadership roles, securing two double World Championships in 2005 and 2006, before making the move to Brackley and the Mercedes team in 2015. In March 2020, Michael was appointed as the team’s first IT Director, responsible for all aspects of IT across the F1 Team, FE Team and Applied Science division, tasked with transforming the IT department into a business led, business enabling function able to meet the diversified needs of the team, whilst adhering to and complying with the wide ranging F1 regulations.

Now in his 20th season in F1, Michael credits his long career in the sport with working alongside great people. He said: “I’ve been extremely fortunate to work with some of the finest leaders and engineers the sport has to offer, being in and around these people on a day to day basis, seeing them at their best and occasionally their worst, you cannot fail to be inspired!"